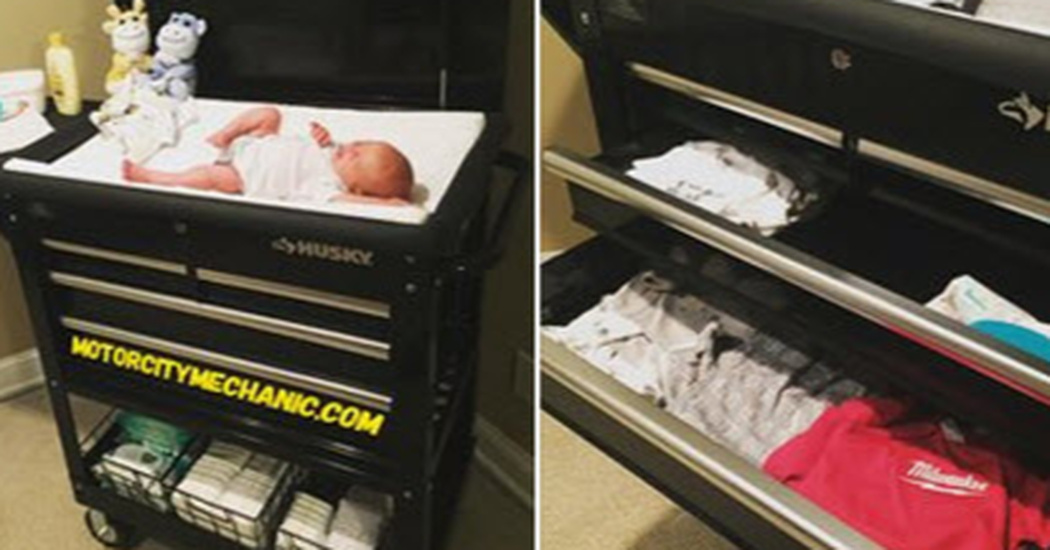 When it comes to parenting styles, there is definitely a difference between fathers and mothers. Mothers tend to be nurturing and they look out for their children in a very special way. Fathers may also do the same but for the most part, they have a different type of reputation when it comes to children. They tend to be more lighthearted in some cases, they might even have a parenting style that is a bit out of the ordinary.

The fact that fathers can have a different type of parenting style than mothers are sharing some rather unusual occurrences on social media. Mothers are sometimes amused by what their husbands get into when they are left alone with babies. It doesn’t matter if it is balancing bottles on the child’s head or scribbling eyebrows on their faces, it tends to be rather interesting. They are also ready to share those special times with others online.

Many of us remember our father as the one that would throw us high into the air and would be rough-and-tumble with us when we spent time alone. That is why it isn’t out of the ordinary for fathers to have some rather unusual ideas at times.

One interesting idea comes from a father who has repurposed a toolbox into a lunchbox for his son. The mother is just laughing hysterically in the background.

David Pike shared the story on a popular Facebook group. He already had children with his wife but they were now adding two additional children’s the family. They were getting everything together for the welcome home.

Some of the items on the list seemed new to him, and he said that they didn’t need them before. His wife was insistent, especially when it came to a diaper changing table. Since Pike was a mechanic, he decided to go in a different direction.

“After testing the waters with a picture of one I found online and getting shot down before I could get the words out,” he wrote, “I knew I needed to tread softly and go with another tactic; delay. The longer I waited to pick something out the more likely she would be more like, ‘Whatever, just find something and find something now.’”

“Well guess whose evil planned worked plus it didn’t hurt having everyone online giving their opinion on the post I created lol. So, my process on projects is to think outside the box which typically means wandering up and down the aisles at Lowes and Home Depot looking for something to make work.”

He came up with the concept of the changing table and analyzed everything from the ground up. He wanted something that was going to be both useful and valuable, even after they were done changing diapers. He also wanted it to be safe for the child.

As it turned out, he chose a Husky tool cart and it was perfect. He did a little baby proofing by adding foam insulation and the drawers held clothing instead of tools.

“Feast your eyes on the Ultimate Diaper Changing Station for under $200,” he posted on Facebook. “I added foam pipe insulation to the edges for protection/safety and some metal baskets underneath for the essentials.”

“Throw in a @harborfreighttools LED light for those late night changes and a side shelf for easy reaching of those much-needed wipes and you have yourself the most practical and functional changing station on the planet! Plus when all is done it makes its way to the garage for repurposing.”

The post was a viral success. Now his wife gets what he was talking about and he is happy to have a use for it, even after the babies have grown up.

“So never be confined to what you have to buy or what’s on the market … think outside the box and experiment,” he wrote. “You just never know what you will create and what (sic) affect it will have.