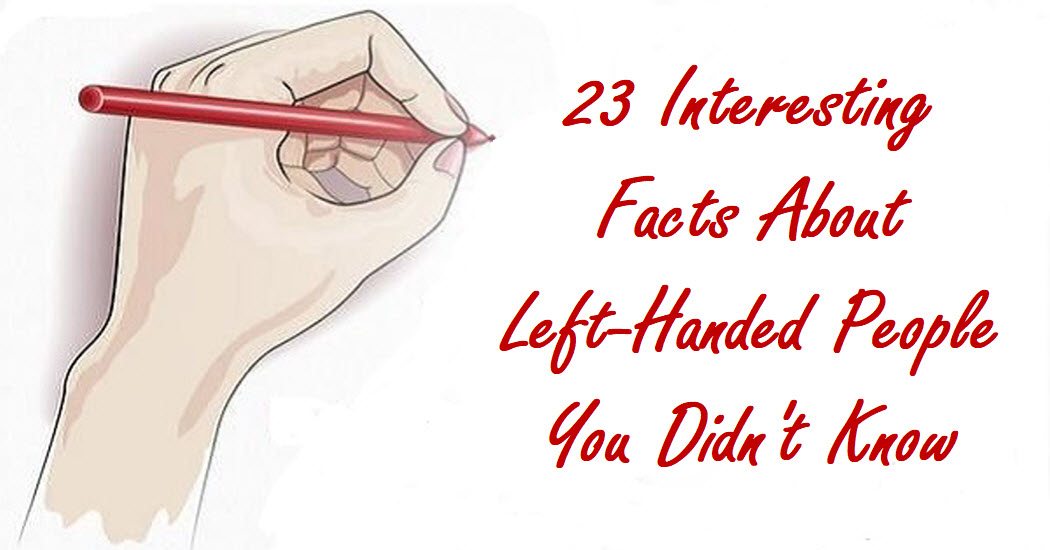 More than likely, you never stop to think too much about how fascinating it is that people may use one hand or the other. Of course, most left-handed people will consider this on a regular basis because the world tends to be set up for the benefit of those who are right-handed. That being said, there are also many other things to learn about left-handed people that are quite fascinating.

The following 23 interesting facts show you that left-handed people are not only interesting, they can be quite amazing as well. More than likely, you never knew some of these facts before. Of course, there are people who use both their left hand and the right-hand and they are known as being ambidextrous. Left-handed people, on the other hand, make up a unique part of the population and as you are about to see, they do so in style.

1. As much as 10% of the population are left-handed

3. Lefties predominantly use the right side of the brain

5. They may excel at certain sports, including baseball, swimming, boxing and tennis

6. 4 out of seven recent presidents were left-handed

7. Lefties who graduate college tend to be richer than right-handed people

8. A long time ago, left-handed people may have been accused of having a bad habit, having a sign of neurosis, being rebellious or even being a criminal.

9. The word left came from an old anglo-saxon word (lyft). It means weak or broken

11. Rats, cats and mice have equal numbers of left and right handed

12. Left-handed people tend to be better at math and architecture.

13. 25% of Apollo astronauts were left-handed

14. Almost 30 million people in the United States are left-handed

15. Lefties are more likely to suffer from allergies and asthma

17. The longest words that can be typed with only the left-hand are sweater, dresses, tesserae and decades

18. There were a number of members of the royal family who were left-handed, including, the queen’s mother, Queen Elizabeth II, Prince Charles and Prince William

19. Left-handed people are more likely to suffer from insomnia

21. Osama Bin Laden, The Boston Strangler and Jack the Ripper were left handed

23. Lefties tend to have a short fuse. John McEnroe is a lefty. Need I say more?